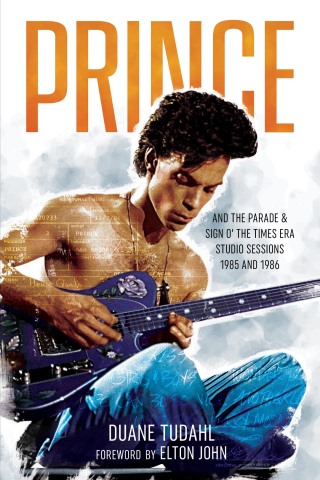 Duane Tudahl takes us back into the world of Prince’s musical masterpieces and personal battles, weaving together the voices of those who knew Prince best during this period. As Prince’s relationship with his band, the Revolution, and his fiancée, Susan Melvoin, crumbled, he threw himself into creative catharsis, recording and releasing multiples studio albums and side projects.

Prince and the Parade and Sign “O” the Times Era Studio Sessions provides a definitive chronicle of more than 260 recording sessions and two tours during 1985 and 1986. These years were full of struggle, but as millions of fans know, Prince would emerge from this darkness to show that the fire of true genius cannot be extinguished.

Duane Tudahl has worked in entertainment for over twenty-five years and has produced and/or directed documentary programming for the History Channel, CBS, GTV, Fox, Discovery, Pax, the Gospel Music Channel, the Food Channel, Tru-TV, and HGTV, among others. He has also been an editor on multiple Emmy-nominated programs, including Intervention, Unsolved Mysteries, and Cops. He has been writing about Prince and the Minneapolis music scene for over two decades. His first book Prince and the Purple Rain Era Studio Sessions won the 2018 ARSC Book Award for Best History in Rock Music. He has written the extended liner notes for the 2020 re-release of Sign "O" the Times.