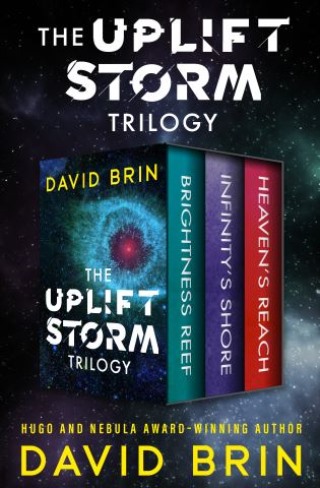 The complete second trilogy of the Uplift Saga, featuring a planet of refugees, a fugitive Earthling spaceship, and her dolphin/human crew.

Six outcast races hunker down on the off-limits planet Jijo when a mysterious starship lands. However, it doesn’t bring the “law” they feared, but something worse—a dark secret the invaders will do anything to keep . . .

Earthship Streaker,with its dolphin and human crew, has been on the run for three years, after discovering a derelict armada whose mere existence seems to drive the Five Galaxies mad. With Earth under siege and nowhere to turn, Streaker has come to far-off, isolated Jijo in search of sanctuary amid its population of secret refugees. Unfortunately, they’ve been followed . . .

With the arrival of deadly enemies, the peaceful isolation of Jijo’s six exile races has ended. While they join forces to fight invaders, the Earthship Streaker must lure other foes into weird layers of the unknown. Meanwhile, a dire prophecy may put the entire universe at risk . . .

Praise for the Hugo and Nebula Award–winning Uplift Saga

“An exhilarating read that encompasses everything from breathless action to finely drawn moments of quiet intimacy.” —Locus on The Uplift War

David Brin: David Brin is an astrophysicist whose international-bestselling novels include Earth, Existence, Startide Rising, and The Postman, which was adapted into a film in 1998. Brin serves on several advisory boards, including NASA’s Innovative Advanced Concepts program, or NIAC, and speaks or consults on topics ranging from AI, SETI, privacy, and invention to national security. His nonfiction book about the information age, The Transparent Society, won the Freedom of Speech Award of the American Library Association. Brin’s latest nonfiction work is Polemical Judo. Visit him at www.davidbrin.com.