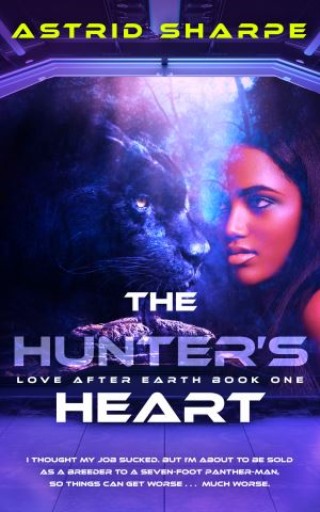 Book one in the Love After Earth series

I thought my job sucked. But I'm about to be sold as a breeder to a seven-foot panther-man, so things can get worse...much worse.

Zensah is the reluctant leader of his almost extinct tribe. He'd thought he was paying passage for willing settlers not abducted females. If only he'd trusted his instincts and refused the trade. But then he would never have met Poppy, the brave human leader whose beautiful eyes burn with courage and defiance. She's the only female he's ever yearned to claim as his mate. But will she ever accept him?

When Poppy fights her captors, Zensah and his men help them escape but find themselves stranded in the wild territories of his home planet. Determined to live independently Poppy asks Zensah to teach her survival skills on their journey to rendezvous with her fellow humans. She should hate him, except she's never felt so alive.

Astrid Sharpe: I've had a long love affair with all genres of romance since I first picked up my mum's fabulous Fabio books as a teenager. I love to create stories and characters that are out of this world, and I hope you enjoy reading them. I live in East London with my husband, two children and two cats, when I'm not writing I pour pints at my local theatre.