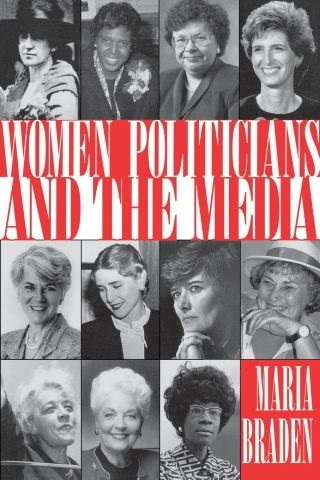 Women Politicians and the Media

All American politicians face the glare of media coverage, both in running for office and in representing their constituents if elected. But for women seeking or holding high public office, as Maria Braden demonstrates, the scrutiny by newspapers and television can be both withering and damaging—a fact that has changed little over the decades despite the emergence of more women in politics and more women in the news media.

Particularly disturbing is the fact that the increase in the number of women reporters appears to have had little effect on the way women candidates are portrayed in the media. Some women reporters, in fact, seem intent on proving that they can be just as tough on women candidates as their male counterparts, thus perpetuating the misrepresentations of the past.

Braden traces a persistent double standard in media coverage of women's political campaigns through the past eighty years. Journalists dwell on the candidates' novelty in public office and describe them in ways that stereotype and trivialize them. Especially demeaning are comments on women's appearance, personality, and family connections— comments of a sort that would rarely be made about men candidates. Are they too pretty or too plain? What do their clothes say about them? Are they "feminine" enough or "too masculine"? Are they still just ordinary housewives or are they neglecting their families by heading for Washington or the state house?

Braden's study is based on both media accounts and the revealing personal interviews she conducted with a broad range of recent women politicians, including Margaret Chase Smith, Bella Abzug, Kay Bailey Hutchison, Nancy Kassebaum, and Ann Richards. All describe agonizing struggles to get across to the public the message that they are serious and competent candidates capable of holding high office and shaping our nation's course.

Maria Braden: Maria Braden was a professor of journalism at the University of Kentucky and the author of Women Politicians and the Media and coauthor of Getting the Message Across: Writing for the Mass Media.